Cuthbert the luscious and other friends...

I enjoyed a day-trip to Horseworld at the weekend, during which time Sarah Weston and I did a bit of work with a few of the residents there. The highlight for me had to be watching Sarah doing a demo at the visitor centre with beautiful coloured horse called Cuthbert. He had arrived at Horseworld as a stallion and had to be kept entire whilst they waited for the prosecution against his former owners to go through. He was gelded earlier this year and has just begun his education under saddle. He really is a beautiful horse, and I was sorely tempted by him as my next 'classical' project.  One young visitor summed it up when she remarked that 'Cuthbert is lush' after he was longreined and ridden for only the second time during the demo at the visitor centre. He has great potential and will make somebody a very good ridden horse.

I also worked with a very tiny filly called Patience who had been seized as a result of a neglect and cruelty case and taken to Horseworld on the brink of collapse. You can see her in the photos, looking very skinny, but much better than when she first arrived thanks to the care and expertise of the staff at the centre. We worked very quietly and informally with her in her paddock just getting her used to the presence of people. 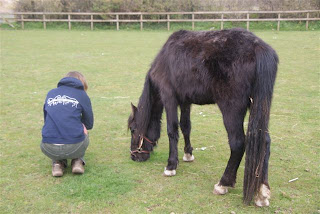 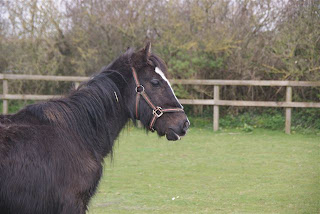 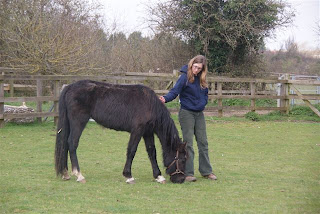 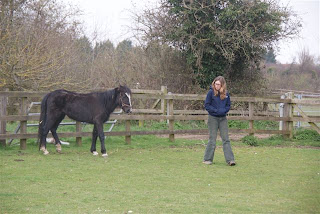 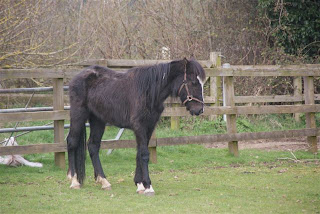 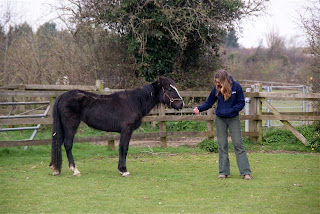 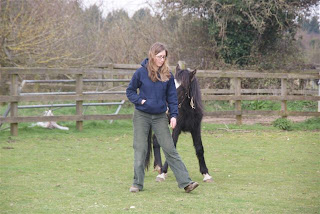 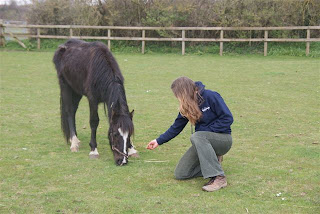 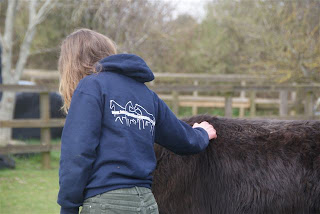 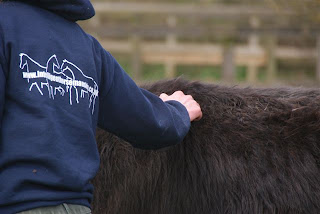 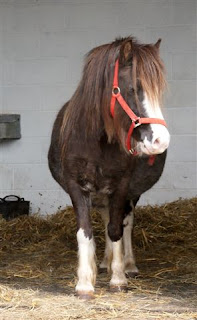 This little mare arrived as a result of a cuelty case and is due to have her foal at any time soon. 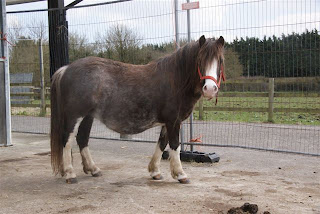 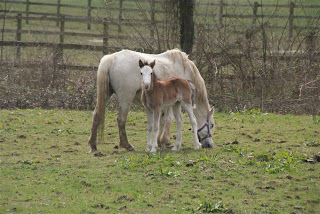 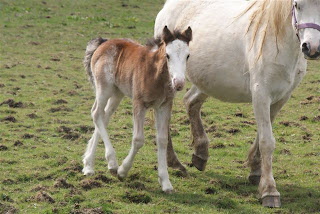 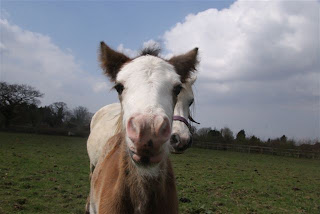 One of the newest arrivals at Horseworld, whose Mum was thankfully rescued and arrived at the centre before she gave birth. 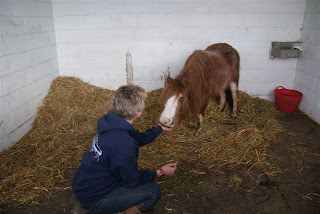 Rusty is absolutely petrified of people, possibly the result of being roughly handled and pinned down. We work with her quietly using advance and retreat in a small space, but she finds it very difficult to deal with and spins, charges round and throws herself on the floor in sheer panic. She does however, have a good interest in food, so there is hope that clicker training might be effective with her.A huge amount of time and patience will be required to make progress with this little mare. 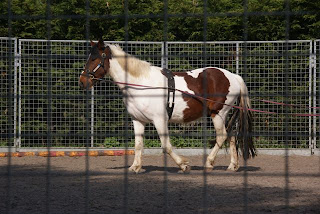 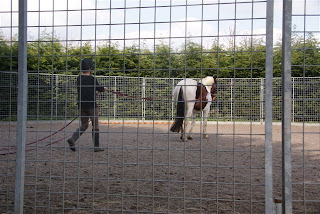 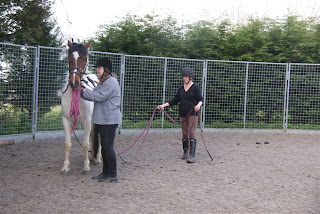 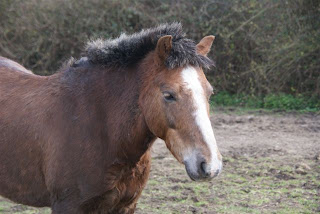 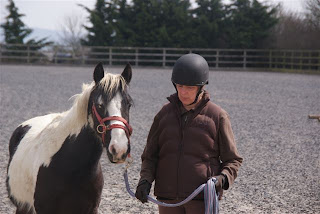 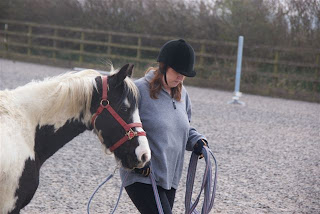 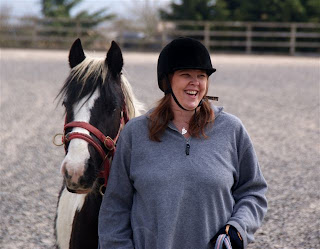 Bronwen was teaching on The Hands on Horsemanship courses this weekend, with some really fab students, both equine and human. There are upto 140 horses at any one time, at this amazing venue- each of them with their own story to tell. With such fabulous facilites and a huge variety of horses and ponies to choose from, we can tailor make the course to suit the requirements of our students, thereby ensuring that everyone gets an educational, informative and practical 'hands on' day! We pride ourselves on being friendly, approachable and flexible, and treat every horse and human as an individual. We can't wait for the next dates in July! For more info see the 'Hands on Horsemanship' facebook page or conact me.
Posted by Jenny Major at 10:49 No comments:

Getting to the root cause of a behavioural problem....

I have been out to two clients recently who have called me out for help improving their confidence. One of them has a beautiful Fell pony. She brought the pony and kept him at a yard in Dorset, where she quickly realised that the situation was far from ideal. The yard owner's answer to many of the problems she was having was violence- at one point the yard owner kicked the pony in the belly in answer to her request for help to get him going forwards from the leg. The pony was labelled as 'dangerous' and she was told he had a long list of behavioural problems. He became known as the 'psycho' pony.

Turns out he was rarely used in the riding school when they said he would be, and neither did he get turned out in the field. The owner realised a lot of his behaviour was related to the way he was managed, so decided to move him. He now lives out in a large field with three other ponies, and not surprisingly, is a completely different character.

The second lady has a gorgeous traditional cob type horse. She feels it is her confidence that is the 'problem'. However, once I begin chatting to her I realise he lives in a dark isolated stable block for 23 hours of the day. The walls are made of plywood, so there's no visual stimulation or natural light. The only time he feels grass under his feet or enjoys any kind of social contact is during a hack. When his owner asks for support with her riding she is stuck at the rear of a ride and ignored, whilst the other riders chat amongst themselves. This means she has to deal with her rising anxiety levels alone. On one occasion when her horse began getting slightly excited as they walked through a field she said she wanted to get off. The ride leader swapped horses with her and gave the cob a few hefty smacks with her whip and told him to 'Get On'.

These clients live pretty close to one another- in fact, when I delved a little deeper I realised it was exactly the same yard which they were having problems with!

I am so pleased that the cob's owner remained loyal to her instincts and recognised that the advice she was getting from those around her on the yard was not positive or helpful. It is so easy to follow suite. Thankfully, having been to a few 'Monty' demo's and read a few of Kelly's books she knew there was another way and I hope that through me she will be able to talk to a few like minded people in the local area and build up a support network.

Sadly, I see this time and time again. I have first hand experience of management affecting behaviour. One of my own horses is an ex 'dangerous' beast who was due to be shot because he was 'unhandlable'. Nothing, of course, to do with the fact he had lived on his own in a small space in a barn for 6 months between the ages of 6 months and a year, with testosterone coursing through his veins and all that baby playfulness pent up inside him!

I would like to ask all those people who keep their horses in a small box for 23 hours a day, devoid of social contact, to sit in a small room with nothing but an endless supply of ryvita and water. Do this for 23 hours a day for a week, only coming out to be grilled by a personal trainer and then perhaps you might empathise with your dangerously excited, wild beast of a horse.
Posted by Jenny Major at 08:26 No comments: 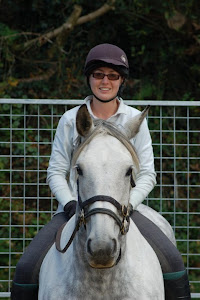